Report by Pierre Dil on his visit to Zambia

Pierre, Lee Ann, and sons Matthew and Andrew Dil visited Makeni Ecumenical Centre , and the St. Nicholas orphanage in Lusaka, Zambia, in October 2012. Pierre is a board member of African AIDS Angels.

Pierre met with the heads of Makeni (MEC) management and Agriculture to enquire about AAA funding to the orphanage and agricultural projects benefitting families impacted by AIDS. We also assisted with a fun-day for the orphans. (Pierre cooked a record number of sausages and chicken legs on a BBQ!).

We toured the new school and computer lab at MEC. MEC now has limited bandwidth wi-fi.
Andrew has stayed on to work as a volunteer at MEC teaching physics and biology in the secondary school, and working one-on-one with orphans to do reading and homework projects, until December 1 2012. He will report to AAA on his return to BC.

We learned that a recent research project revealed 3 in 20 women in prenatal clinics are positive for HIV. There is the impression that rates and deaths are still high in Zambia, despite the availability of Anti-retroviral treatments (ARV), as ARV’s have led to carelessness amongst infected people (who can often look and feel well quickly after treatment, but are still carriers of the virus). More general statistics are found here.

We noted that the AAA funding supports about 10% of the total annual budget for the Makeni Ecumenical Centre and just under 33% of the orphanage budget. Aside from orphanage support, AAA funding is also designated to agricultural work supporting families affected by AIDS in Kawelwe village. The agricultural officer estimates 50% of families in settlement farms have some individual in their family who either has died of AIDS or has HIV. Friends of Makeni, and KKW, both Dutch organizations, had also been supporting the orphanage, however have retracted funding recently, saddling MEC with ever higher proportions of the total cost for the orphanage. Most funding for the orphanage is derived from school fees charged (as is the case for schools across Zambia) to the general public utilizing their school service.

There are currently 29 orphans in the orphanage ranging from infants to 18 year olds who have not completed secondary school yet. The general policy is MEC will keep orphans in the village, under the care of a house-mother supervisor, until they either fail Grade 9, or pass Grade 11, such that it is not unusual to have older teens still in residence. Every effort is then made to enable the child to either go on to a trade, employment, or enrollment in other adult employment courses at MEC. Almost always too, a distant relative is found to re-assimilate the child into Zambian society. Contact with distant relatives (in most cases of course their immediate parents are dead from AIDS) is encouraged throughout their years at Makeni.

There are emerging discipline problems with the older orphan teens, however these do not seem dissimilar to what the average Canadian family would experience with teens! The difference is, however, that the orphans do not have the tight family structure and care in a small family unit, to help them learn from their mistakes. This has put a strain on management at MEC, and new guidelines are being looked at, to encourage discipline. New intake might be limited to girls only (one idea being contemplated) or scholastic success will be insisted for older teens (or they will be released earlier to their extended family). Ideally another staff person should be hired to ease the problem, but they can not afford this.

Zambia’s President Sata declared, in 2012, that employers must comply with an increase of the minimum monthly wage, from K510,000 (where approximately K5000 equals one C$), to K1.2 million - more than double the previous rate. A second tier of the programme, would see those earning K800,000 per month making K1.6 million. Despite the apparent fairness of this change (a think-tank in Zambia calculated a family of 6 needs a minimum of K3.2 milion for a month to survive) there does not appear to have been much warning or discussion with employers, and there likely will be a crisis across the country as a result. MEC has no idea how they can comply with this increase, and an appeal to government was rejected.
Incidentally, the complexity of dealing with millions of kwacha, in budgets, should improve in 2013, with new currency coming into effect, cutting 3 zeros off all amounts!

MEC is exploring new and alternative sources of income, to assist in the shortfall in general income (see above comments regarding donors leaving, and new government pay guidelines which will adversely affect programming), such as fish-farming ventures, more enrollment for the school (a 50% increase in enrollment in the school would solve budgetary shortfalls), housing adult students for a fee, and possible tourism ventures (such as inviting tourists to experience a rural farm experience for a fee).
MEC has invited comment from AAA regarding the feasibility of a full scale evaluation of the agricultural component AAA funds at Kawelwa, at a cost of K40 million. Friends of Makeni have requested a full evaluation of MEC activities, but Terms of Reference have not been worked out.

Pierre is a member of the board of Makeni Ecumenical Centre, and also had discussion regarding leadership transitions and management needs, into the future years, with staff. 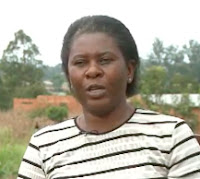 Peter Kepkay has returned to Vancouver from Malawi and put together an informative 6-minute video on African AIDS Angels projects there. You can watch it on our website.

Peter is a long-time friend of Seeds for Malawi on Saltspring Island and visited the projects as part of a larger filming project still in the works. We are very grateful to him for sharing this copyrighted video.
Posted by African AIDS Angels at 10/05/2012 02:31:00 p.m. No comments: