We're heading into the busy season for fund-raising and look forward to receiving your angels. Please take a moment to note a few points on quality control.
Angels are handled several times and packed in boxes, so they need to be well constructed with future handling and donors in mind.

Where to find angels

Angels will be available at these upcoming events in the Victoria area:
For angels at any time, consult the list of generous shops on our website.

We are always in need of more places to present angels. Please send an email if you have a small or large opportunity to add angels to an event. 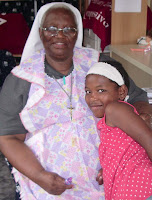 Following receipt of the second half of their 2011 allocation from African AIDS Angels, the people responsible for the South African progams sent reports and thanks:

Thembalethu (Assisi) orphanage
Sister Andrea, in charge of the children’s shelter, thanked the AAA volunteers for the funds sent in June. “You are the real angels. You have such special ways – a kind of magic touch. Your donation was highly appreciated, more than words can say. There is a world of special meaning in the words that comes your way.”

The head of the Outreach program, Sister Evarista, recently passed away and her place has been taken by a newly retired teacher.

The youngest child now at the shelter was born in March and abandoned by his mother in the hospital at Port Shepstone. “He is growing well and is spoiled by everyone.” Sister Fakazile is still helping the school-age children in their studies after the school day is finished. This has dramatically improved the children’s grades. The photo shows the children's playroom building.

There will be a change in the infrastructure at Thembalethu. The Sisters had originally found accommodation for the orphans in a wing of a former hospital. The South African government is requiring the construction of cottages which will be the homes for 6 to 8 children each. This has proven to be a better system overall but will stretch the resources of Thembalethu. 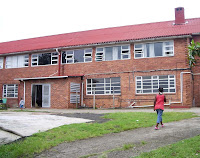 The photo shows the former hospital.

St. Mary’s Hospital - Born to Live Program
Sheena Hardiman from the large hospital at Marianhill near Durban calls the AAA volunteers “stars” and thanks them all for the June contribution to the Born to Live program.

In the past year, she says, 964 mothers have gone through the antenatal classes. Forty-three per cent of those women were HIV-positive. “All of these mothers would have received treatment to prevent the unborn baby from getting HIV and the babies would receive the preventative drug at birth.”

“We have many more mothers giving birth at St. Mary’s who may not have been through the Born to Live program but come through referral clinics and are HIV positive. We give the mothers the preventative drug and to the baby at birth. These number 1908. Our statistics still show a 96 per cent success rate. These moms and babies remain in the program post-delivery until 18 months when the final blood test is taken to see if the baby is HIV negative.”

Sheena says one indication Born to Live is working is that fewer children are being admitted to hospital who are HIV positive at a very young age.