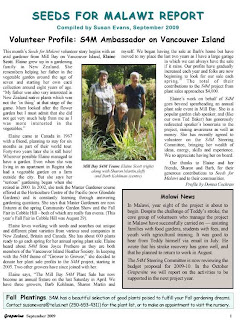 The Seeds for Malawi project on Saltspring Island sent their newsletter for September. This hard-working group raises thousands of dollars through plant sales and other means. As the newsletter describes, they are developing relationships with gardeners in other locations.

The Cordova Bay United Church angel-making group in Victoria raises some of its funds by supplying an African shop in Salmon Arm BC. The Gondwana Gallery is run by relatives of a Cordova Bay member, and the exchange of angels (or 'adoption' as they call it) there has been brisk.

Recently they sent some photos to share with other angel supporters, showing African AIDS Angels among their other African works of art. If you click on a photo, it should enlarge.

We received an e-mail from Sister Andrea who heads the Assisi children's shelter. She writes that the children who attend a local school came home very excited a few days ago because they had done very well in their third quarter tests. She says this is due to the fact that funds from AAA enabled them to bring in a part-time teacher who gives the children extra after-school assistance.

"The garden project is coming along very well," she adds. A woman comes every weekday to work half-days in the garden. "The children, especially the boys, enjoy planting and watering the vegetables. We are now enjoying fresh cabbage, carrots, spinach, beetroot and lettuce.

The Roberts Creek group led by Miki makes sewn angels as well as cone angels. They get together occasionally with some friends and relatives from Vancouver. They supply several Sunshine Coast shops and a gallery in Deep Cove, and do beautiful work. Miki sent this report in July:

“The angellers and four friends spent a beautiful summer weekend at a cottage making angels. There were nine of us, and seven from Vancouver. Packed with food and wine and angel supplies, we "worked" making almost 90 angels until late Saturday night. On Sunday, we finished and cleaned up and went for a refreshing walk. It was a wonderful girls’ weekend. One of the teachers had made angels with her class last year. We have planned another angel making weekend in early September.

We are now selling angels at Carola’s Quilt Shop in Gibsons. The owner became so interested that she has given us space on the front counter and donated two large bags of batik and African patterned fabric. A master spinner donated a huge spool of dark brown wool for hair, so we’re very pleased with the generosity of these ladies.

Both Gaia and Carola's carry the cone angels as well as the sewn angels. We did have angels at Vortex, a high-end dress shop in Sechelt, but the owner apologized for the lack of angels being sold. She would like to start afresh closer to Christmas. I'm feeling more optimistic about certain businesses who might be willing to handle the angels in the fall, especially the Christmas season. We're working on it. We're still glueing and sewing along, producing African Aids Angels gladly.”
Posted by African AIDS Angels at 9/06/2009 08:52:00 p.m. No comments:

A long article with photos about the Nova Scotia angel-makers led by Judy Starritt is published in the September issue of Shoreline Journal, a community monthly publication. Their fund-raising efforts have been really successful.

The link to Shoreline Journal is currently direct if you scroll down the page. In future months it will be moved to the Archive for September.
Posted by African AIDS Angels at 9/03/2009 10:26:00 a.m. No comments:

Our stock of completed angels in Victoria is a bit lower than we need for the forthcoming busy season. If anyone has completed angels please contact Lorraine or Vic at lvparsons@shaw.ca or 250-472-6499.

Also, we are great need of finding volunteers who are willing to do hair. Many thanks to those who are working on this task now, and have done so in the past. Your efforts are greatly appreciated.
Posted by African AIDS Angels at 9/01/2009 10:06:00 a.m. No comments: