Nathan How nominated to finals of Me to We Award

Hello everyone,
Vic Parsons, Chair of AAA, has nominated Nathan How, one of our young board members for a Me to We Award. He has been chosen as one of three finalists. The winner will recieve $5,000 to donate to their charity of choice. The winner will be determined by an online vote.
Nathan has chosen to award any money earned to AAA, if he wins. 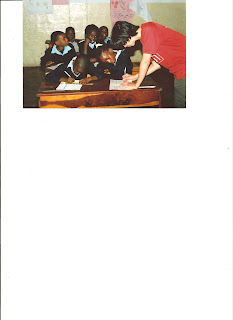 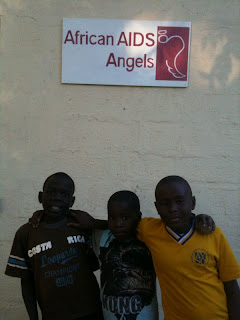 Here's how you can help us earn this money:
Please take a brief moment to vote in the 2012 Me to We Awards and help African Aids Angels win $5000!
Type or copy this address: www.metoweawards.com. Click into  the section marked "vote now".
Find the section for Youth in Action 13 - 17 years.
If you agree to, vote for Nathan How, one of our board of directors. For better or worse, you must vote for someone in all six categories (It makes for interesting reading I assure you. See what young community leaders are up to). There is a $5000 prize for each category.
Voting ends June 8 so don't delay - vote right now!
Did you know.............
Please forward this message to your friends, family, co-workers, neighbours - anyone who supports your work with AAA. Post it to Facebook, Twitter, a poster in the office. Encourage people to pass it along to school friends, youth groups and anyone else who would like to support the cause.
Thank you!
Pierre Dil
Posted by PitaniBwino at 5/27/2012 08:54:00 p.m. No comments:

After consideration for some time, our partners in Malawi have decided to scale back their intensive efforts to help people in their community who are affected by HIV/AIDS. As has been reported before, Teddy Phiri suffered a stroke several years ago and some of his responsibilities have been picked up by his wife Delirah and another couple.

This volunteer group of four decided to continue the nutrition support project which supplies supplementary food to 20 people who are on ARV medication but cannot farm due to their health status. A few are well enough to start small businesses such as selling cold drinks. 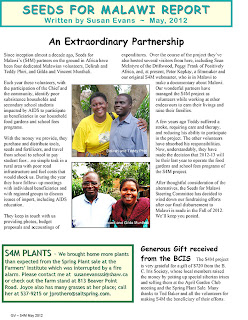 The money for the nutrition support project comes from African AIDS Angels. The money for the other larger components which will end in 2013 - secondary school fees and farm inputs for 50 to 80 farmers - comes to us from Seeds for Malawi on Saltspring Island.

The Seeds for Malawi group headed by Susan Evans has decided that this is also the time to wind down their efforts. This group which is affiliated with the Saltspring Garden Club has worked extremely hard for many years to raise substantial funds, mainly by selling high quality plants which they grow themselves. We congratulate them and thank for all their efforts.

We will be sending their last donation as usual in September this year.  Please read their newsletter for further explanation. Click on the image to enlarge, then press Control and + to enlarge further..
Posted by African AIDS Angels at 5/23/2012 09:54:00 a.m. No comments:

Peter Kepkay, a film-maker from Vancouver is visiting Malawi and including our projects on his trip.

Delirah Phiri sent some photos of Peter's welcome from recipient groups including farmers, families on food support, and secondary students.

We look forward to seeing the results of Peter's filming at a later date.

More comments from Delirah:
"The harvest this year is not as expected due to low rainfall in
January but at least some harvest will be achieved.
The Malawi kwacha has been devalued by the IMF [International Monetary Fund]: it's now 250 against the US dollar. Prices of commodities have gone up and people are scared of the future. But I believe this [devaluation] a good move by the [new] Madam President so that donors are able to aid Malawi.
Fuel [gasoline] is being sold at 490 Kwacha which is equal to almost 2 US dollars per litre but still scarce.
We all send our regards to you.
Delirah"
Posted by African AIDS Angels at 5/15/2012 05:12:00 p.m. No comments: