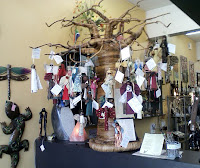 The Gondwana Gallery in Salmon Arm BC has been carrying Angels for several years. The Gallery is a fair trade store with a large number of items from Africa and elsewhere. The angels are made by the group at the Cordova Bay United Church in Victoria, and transported to the Interior.

One photo shows the large tree made from banana leaves which sits at the front of the store and displays the angels beautifully. [Click to enlarge it.] The second photo is of the owners and operators, Tibout and Marlene Glazenburg.  They support an orphanage in Africa as well as assist our fund-raising. We thank them! 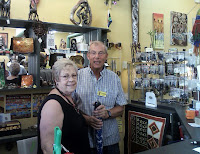 The Cordova Bay group is winding down its efforts after meeting for almost four years. Roselyn (third photo) and Mary Margaret have been super volunteers, showing people how to make angels, preparing supplies for monthly sessions, and getting the angels to Salmon Arm. The Cordova Bay United Church has generously contributed free space and storage. 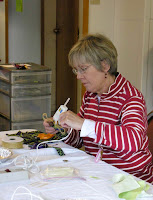 The final sessions will be in September and November, with no session in October. We wish Roselyn and Mary Margaret well with their increased free time.

We'll be at these outdoor markets in August
Stop by, say hello and pick up some new products. Many thanks go to the volunteers for the July and August markets.